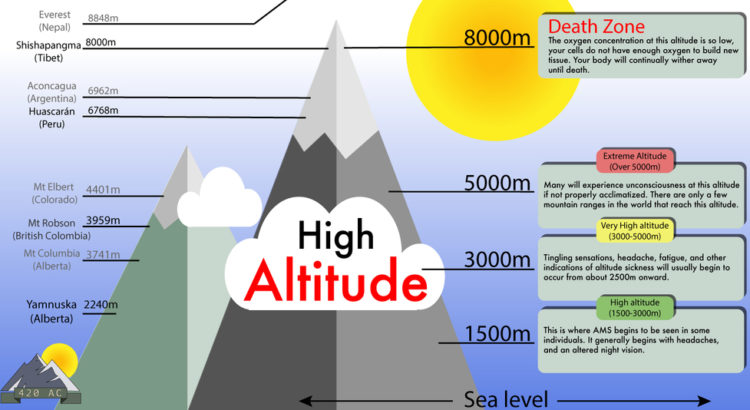 The science behind altitude sickness is fairly simple to follow. Throughout the troposphere (ie from sea level to an altitude of approximately 10km), the air composition is in fact always the same, namely 20% oxygen and nearly 80% nitrogen.

So when you read that there is a lack of oxygen at the summit, that’s not strictly true – oxygen still makes up 20% of the air. So the problem is not lack of oxygen – but the lack of air pressure.

To put it in more precise terms: atmospheric pressure drops by about tenth for every 1000m of altitude. Thus the air pressure at the top of Kilimanjaro is approximately 40% of that found at sea level.

In other words, and to put it in layman’s terms, though each breath inhaled at the summit is 20% oxygen, just as it is at sea level, it becomes much harder to fill your lungs since the atmosphere is not pushing so much air into them.

Due to Kilimanjaro’s rather rapid ascent profile altitude sickness amongst trekkers is unfortunately quite common.

The followings are Acute Mountain Sickness symptoms these include:- Fatigue

If you suffer any of the symptoms above it is important to communicate to your climbing partners and guide how you are feeling.

These symptoms generally disappear if you rest for a day at the level at which they originally started. This is why an acclimatization day where you climb high and sleep low is so important!

Finally, as recommended by the charity, Altitude.org, always remember these 3 Golden Rules when at altitude:

Acetazolamide, or Diamox, is a drug that has been proved to be effective at mitigating altitude sickness.

The drug helps to increase the acidity of the blood by acting as a diuretic and promoting urination.

Increased acidity in the blood is equated by our bodies as increased CO2, and hence one starts breathing deeper and faster to get rid of the CO2. Deeper, faster breathing increases the amount of oxygen received by the blood and this helps prevent the onset of AMS symptoms.

It is important to note that Diamox is a prophylactic (preventative medicine), and does not cure the symptoms of AMS.

Once altitude sickness symptoms have started, the only way to stop them is descent. Under no circumstances should Diamox be used to continue an ascent with AMS.

Diamox is also a prescription drug so it is important that you first consult your doctor to check whether it is a suitable drug given your particular medical history.

It is not suitable for pregnant women or anyone with kidney or liver disease issues.

We recommend taking Diamox for 2-3 days 2 weeks before departure to test whether you experience any side effects.

TYPICAL SIDE EFFECTS ASSOCIATED WITH DIAMOX ARE:

– everyone experiences this when taking Diamox. It can result in the development of kidney stones so it is important that you drink loads of fluids whilst taking the medication

NUMBNESS AND TINGLING IN THE FINGERS, TOES AND FACE

– Many people experience this side effect when taking Diamox. The sensation is a little discomforting but not dangerous

– this is rare. These side effects should be identified during your test before departing for Kilimanjaro. Unfortunately these side effects are common with AMS and therefore can easily be misdiagnosed as AMS

Diamox comes in 250mg tablets. Most people take half a tablet in the morning and half in the evening.

You should start taking tablets one day before arriving in Kilimanjaro and continue taking the same dosage for all ascent days. You can cease taking Diamox on descent.